Coins are obnoxious.  It’s not their fault…no, no, it’s because governments ’round the world can’t resist weighing down our jeans or handbags – or not, as you’ll see shortly – with coinage.  Is it in deference to those of us easily distracted folk, eager to make music out of the clanging currency?  Or, are they still produced so that cuprolaminophobics – look it up! – can amble over to the nearest train track to have their way with coins?

Kudos to Canada for stopping the minting of the tangible penny.  (As an aside, I like how their official mint website has a section for “our products.”)  Denmark’s central bank doesn’t produce paper money or coins.  On the flip side, too many countries around the world accept US or foreign coins.  Plus, quarters are so darn useful, whether it’s for one-armed bandits or one-night stands.

Getting back on track, I guess I used to be something of a numismatist, or coin collector.  The majority of my collection consists of coins more useful these days as paper weights than legal tender – for instance, pre-euro, and something from Zimbabwe in the ’80s – but that’s part of the point of it being a hobby, no?  What follows is a sampling of some of the less welcome members to pockets worldwide (and yes, I realize that they’re still money)…

The left column, with examples (top to bottom) from Hong Kong, the Maldives, Zimbabwe, and the UK, are ones that have not been eluded by the American diet.  However, if one of those ever fell from your hand or pocket, you’d definitely notice it.

At the same time, are those any more obnoxious by their extremely light opposites in the right column? We have the Japanese one (y)en, the Indonesian 500 rupiah, and the bane of my consumerist existence while in China, the fen.  If a cashier gives you a fen, it’s a euphemism for the country laughing at you.  Bad advice: try spending it in Taiwan. 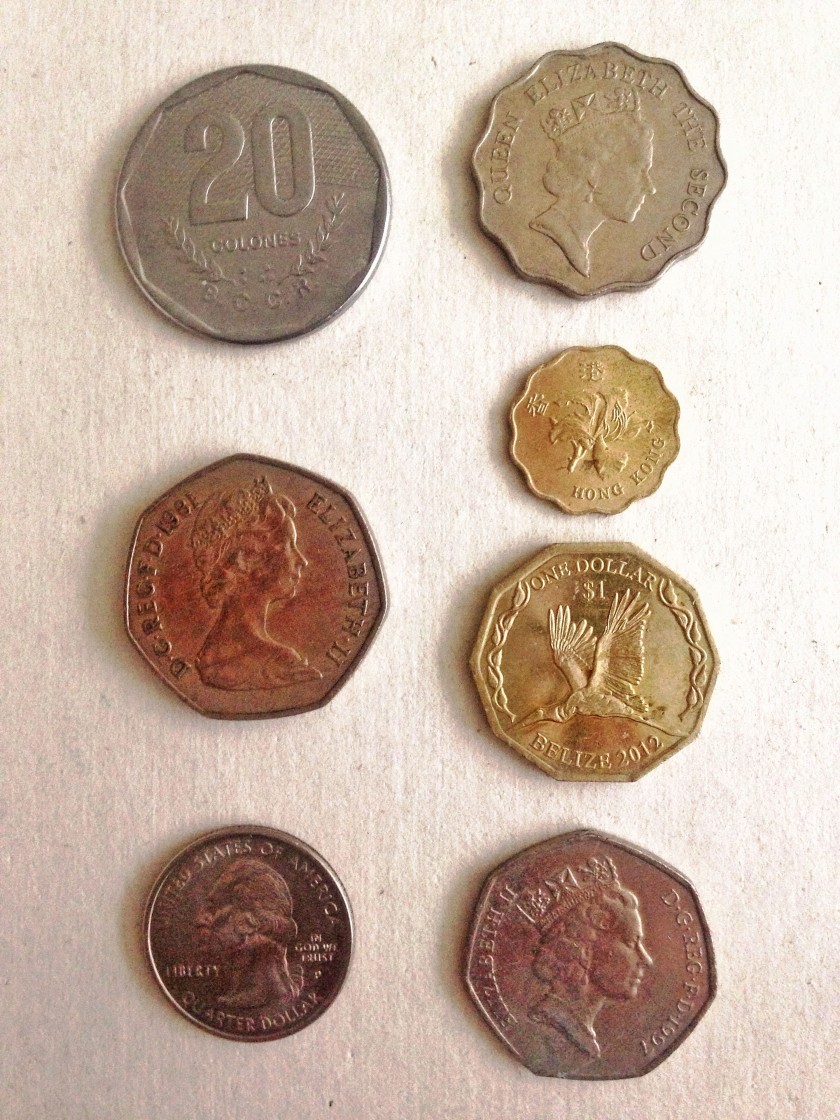 With the US quarter as a guide, the left column, with Costa Rica and the UK again, as well as the right column with Hong Kong, Belize, and the same 50p from the UK, display coins that are too darn big.  Though we’re nowhere near the scale of the monolithic currency of some Pacific Islands, what’s the reason for this?  Save for Costa Rica, it seems as if imperialism isn’t the only category in which the British got carried away…

The right column also shows some of the funkier shapes of coins.  Someone was asleep at the switch one day, and now his/her handy work gets the attention of bloggers.

Starting from the left, we have the Japanese five (y)en, the US dime, 50 cents from South Africa, 5 sentimo from the Philippines, one tetri from Georgia, 5 koruna from the Czech Republic, and 20 colones from Costa Rica.

The first time I noticed a perforated coin was in Japan.  Curious about why some coins have a hole in them?  Necklaces are one reason, sewing coins into clothing, another.  Thinking about it another way, the Japanese 5 en coin isn’t worth much – particularly outside of Japan – but string it onto some jewelry, and watch your coffers grow.

As for the middle column, that coinage is ridiculous small; the US penny – for its size and its denomination – and the 20 colones, were placed in the photo for comparison.  I’d feel sheepish (particularly outside of their home countries) trying to pay for something with tetri, or the colones for that matter.  Can you imagine a coin-only checkout line?

I hope that you enjoyed this brief tour of coins around the world.  Are there any standouts in your book?

Any Questions? / Want to Work Together?

Passport Stamp-Themed Home and Tech Goods, Only at Society6